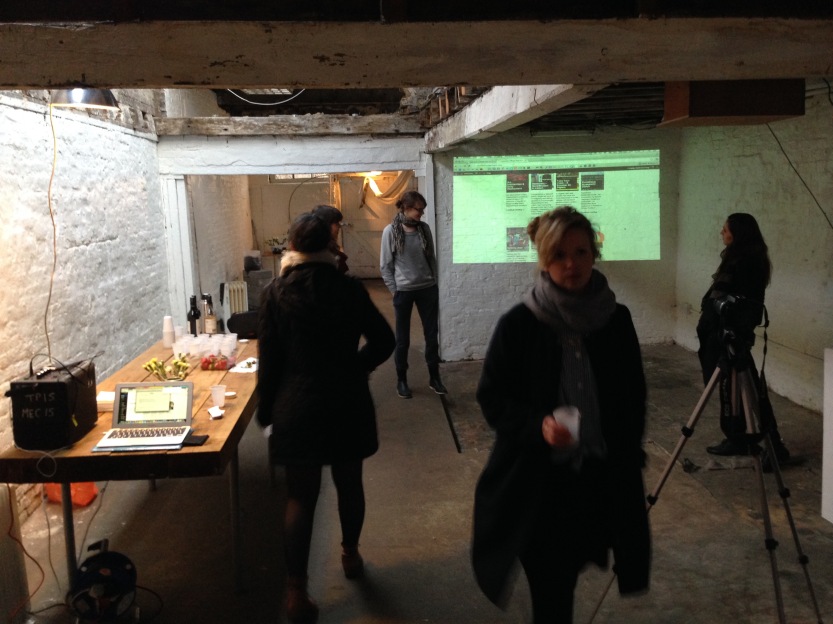 The collective was established at Goldsmiths College, University of London, in December 2013. Our research is dedicated to the collection and investigation of everyday protest practices and their visual representation. This ongoing online discussion has thus far resulted in: an open-for-submission archive, the guided tour series WANDERS, various artistic collaborations, and publication and exhibition potentials in 2016. The collective was initially founded by Wei-Hsin Chen (Taipei), Wiebke Hahn (Berlin, London), Aline Khoury (Jerusalem), Vivi Kallinikou (London, Berlin), and Karina Hanney Marrero (Winnipeg, Reykjavík).

On the 26th March 2014 the archive was launched at Harts Lane Studios a non-profit community gallery in New Cross, London. The event created the opportunity for guests to access the archive, converse with the collective, and its contributors. A total of 25 artists responded to our OPEN CALL and were represented at the launch. The event was curated by Wei-Hsin Chen, Wiebke Hahn, Aline Khoury, Vivi Kallinikou, and Karina Hanney Marrero.

‘We are not protesting what we don’t want, we are performing what we want.’ –  Emily Roysdon

The AIDD online-archive is a resource comprising an ever growing collection of research, written works, videos, photographs, art works, and other media based material related to socio-political practices and engagements, or what we refer to as everyday protest. This collaborative archive is regarded as an open-for-submission platform, created to share information and inspire interest in assorted depictions of Action, Intervention and Daily Deployment (AIDD).

In the wake of protest movements around the world, the term protest has acquired a default definition; one associated with masses of people, and the feeling of agency, disapproval and contempt. While it’s not our objective to undermine the relevance and importance of public group demonstration in any way; we asked ourselves if we could seek out different conceptual and material representations of protest?

Our answer was found in a simple shift. We shifted our focus away from the circulating imagery accompanying protests and zoomed in on individual commitments, practices and their materialization. We found that these personal protests indicated commitment and resourcefulness, and represented powerful demonstrations of the individual’s daily impact on the greater social-political ecosystem. At that point the notion of the everyday protest was born.

Everyday protests are pro-activities that attempt to reconfigure the socio-political status quo. This can be done through: voting, boycotting, recycling, money-less days, guerilla gardening, public or domestic interventions, volunteer work, marginal community projects and socially engaged art practices. Their modus operandi is to introduce and highlight sustainable, behaviour altering, ongoing, DIY solutions to recurring systemic issues. In other words, they represent the importance of individual as well as collective effort when it comes to social change.

AIDD is an ongoing voluntary project. We believe that by collecting and sharing this material much deserved attention will be called upon these modes of everyday protest; as a result we hope that the site opens debates, raises awareness, and provokes action. Disapproval is a starting point but only brings us halfway. Ideological sustainability is gained through pro-activities that benefit us all. Passivity is no longer an option.

For enquiries and questions send us an email at aestheticsofprotest(at)gmail(dot)com.